Sorry for it, but I've been busy working on a Ketubah for my cousin's wedding.  They were kind of last minute, and somehow my mom passed my stuff on to my great aunt who passed it on to the happy couple.  Less than a month?  No problem.  Luckily, FH went out of town last weekend so I was able to sit and work for superhuman lengths of time with just myself.  It was kinda nice and very productive.

They are getting married in Napa Valley, CA and are being married by a good friend.  He is Jewish, she is not, but they wanted a Ketubah with Hebrew, and they wanted something that represented them as a couple, not something that was over-the-top Jewishy with pictures of Jerusalem, etc.  They sent me over a photo of a Ketubah that they liked, but that needed some tweaking.  Below, the process:

I started with this, the photo that my cousin sent: 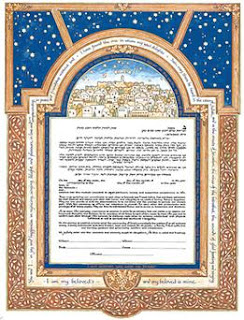 And I started sketching: 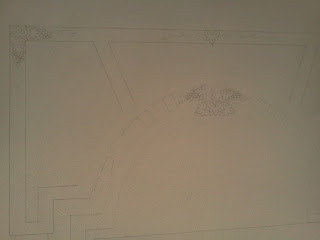 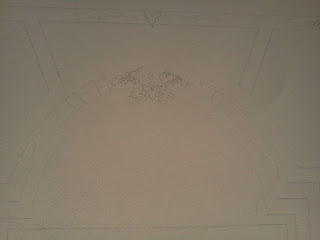 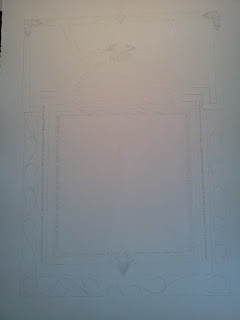 And then painting (this is my favorite part because every little thing you do changes the piece so much): 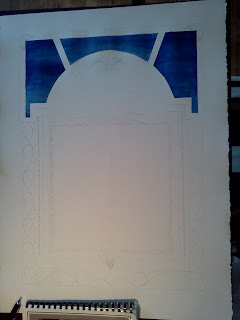 I added some stars, the first layer of the border, and began to paint in the grape leaves: 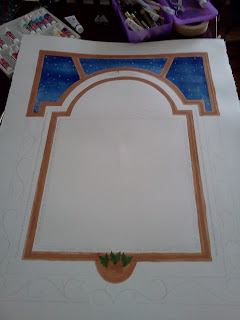 We picked out some text from the wedding blessings that were more universal, and they loved the saying "Ani L'dodi" so we incorporated it on the top in Hebrew (and later, the English was added to the bottom): 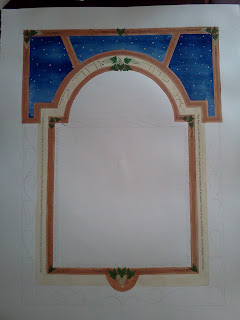 In the original, there was a scene of Jerusalem which didn't resonate with the couple, so I painted in a vineyard scene of Napa: 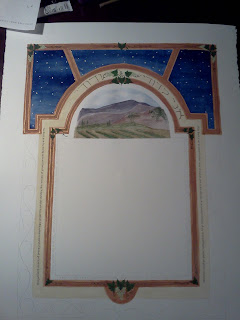 Then I added the dark blue border to hold the Hebrew text in gold, and added in the outside framing which will have climbing vines: 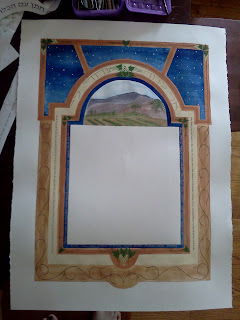 Last night, I finally got an ok on the text, so I wrote that in: 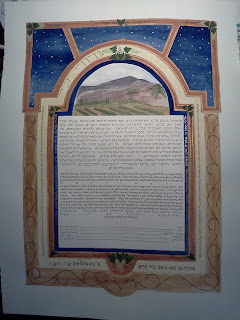 This weekend I will be finishing up the leaves and grapes in the outside frame and looking for a giant scanner to run this baby through.  Kinkos said they could do it, but the last time I took something there they had no idea what I was talking about and the scanner scrambled all the paint colors on the digitized version.

I will post my final scan once I get it- Fingers crossed.  Happy Memorial Day!
Posted by Jen at Friday, May 27, 2011

Jen
Shaker Heights, Ohio, United States
I am an artist, kitchen designer, soon-to-be wife and ocular explorer, chronicling the beauty of what inspires me.